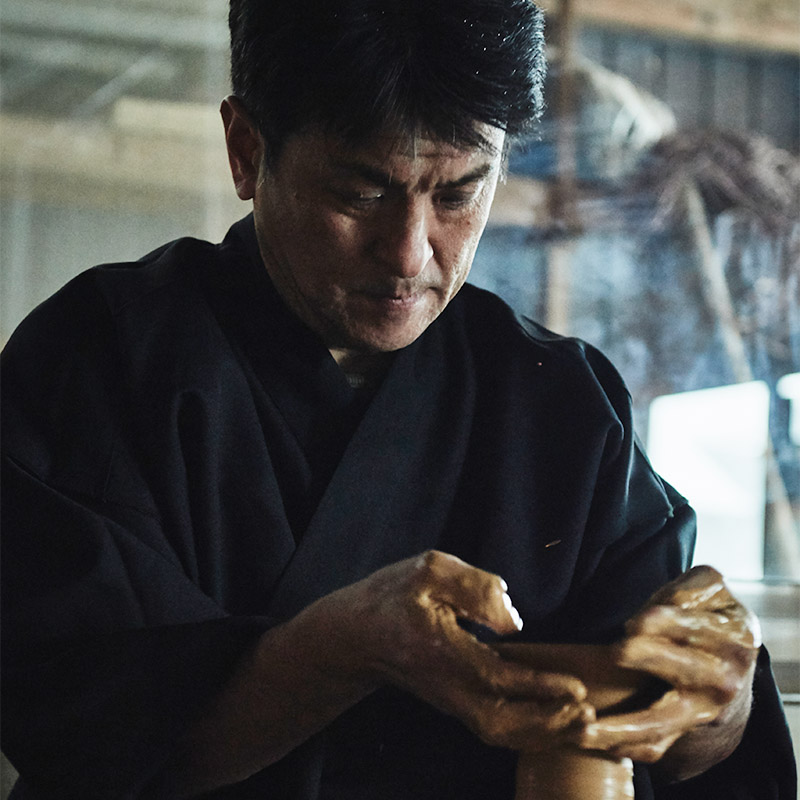 Born in 1972 as the eldest son of ONIMARU Hezikan the First, ONIMARU Hezikan the Second has dedicated his life to the Takatori Yaki pottery style founded in Fukuoka prefecture.
‍
Among his incredible achievements, Onimaru san took part to the 2012 Biennale of Contemporary Pottery and Ceramics of Sèvres, in France. Several pieces made by Onimaru san are now part of the collections of famous Zen temples in Japan, including the Ginkaku-ji and Daitoku-ji in Kyoto. 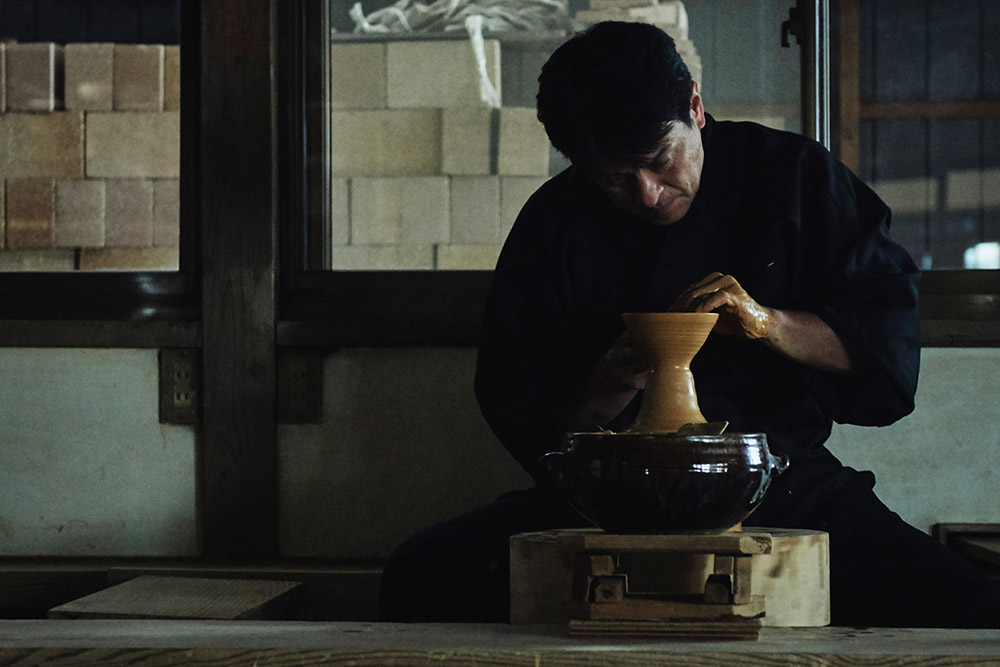 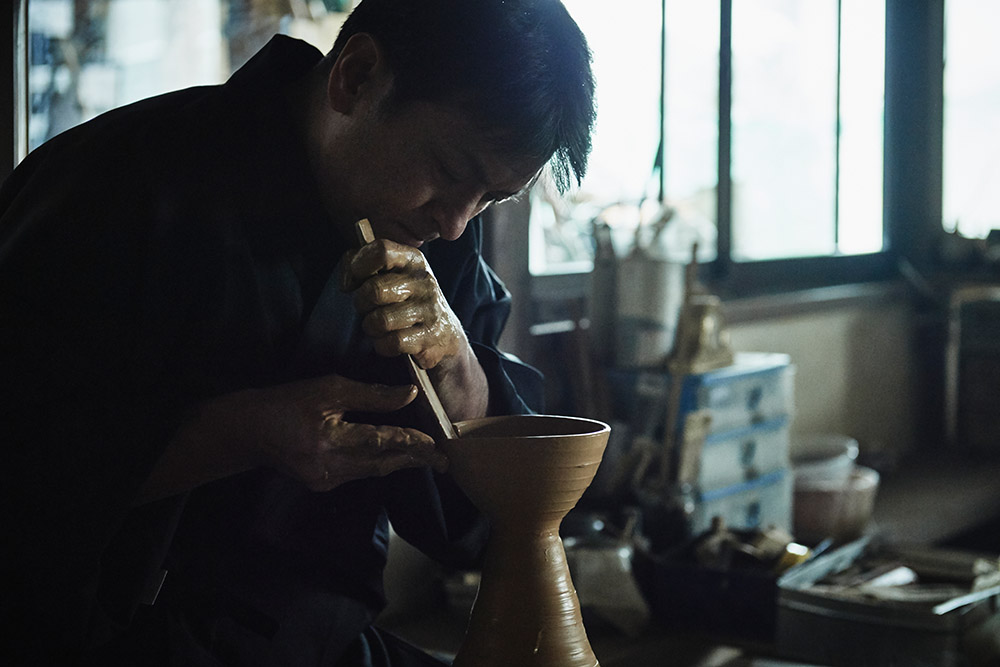 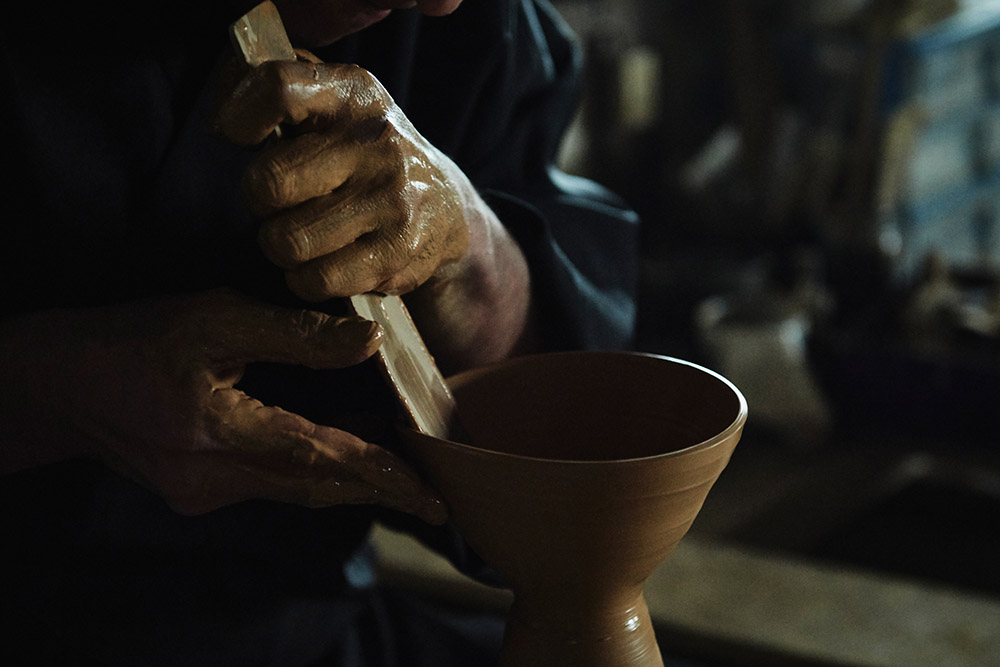 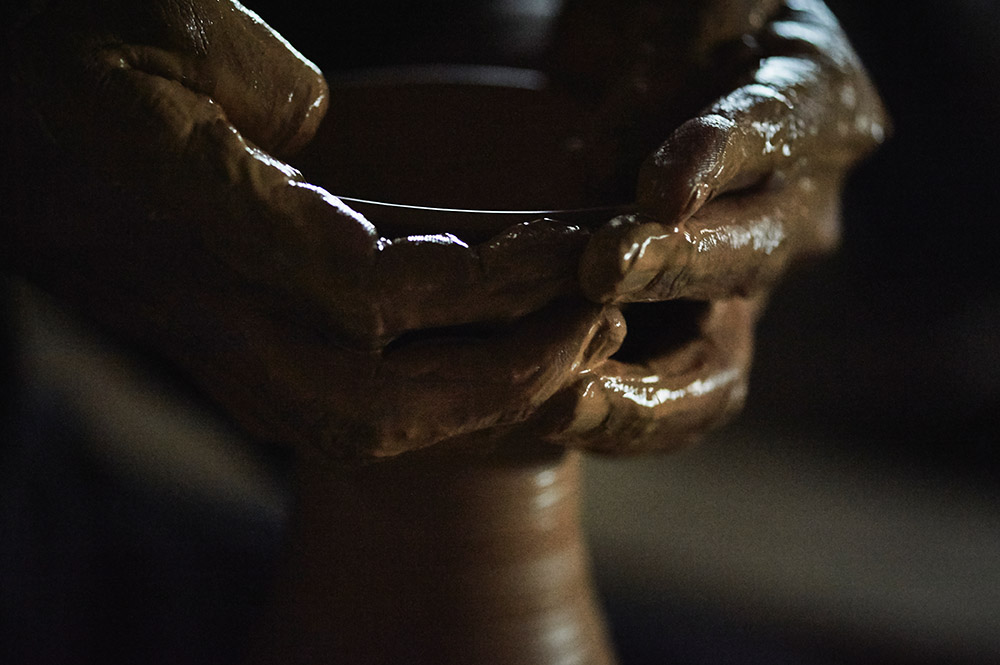 Biography of Hekizan Onimaru the Second

1972 - Born as eldest son (given name at birth: Yusuke) to the first Hekizan Onimaru.
1995 - Graduated Osaka University of Arts, Plastic Arts Course, Crafts Department.
1998 - Began pottery making in Koishiwara, Fukuoka Prefecture.
2003 - Received Incentive Award at the Fukuoka Prefecture Art Exhibition.
2005 - Works selected to be shown at the Japan Traditional Art Crafts Exhibition.Named as second “Hekizan” by Myoho Takada, Roshi of Daitoku-ji, the head temple of the Rinzai sect's Daitokuji school of Japanese Zen Buddhism.
2006 - Received Minister of Economy, Trade and Industry Prize from the Japan Recommended Gifts and Souvenirs Examination Board.
2008 - Received Television Nishinippon Award at the West Japan Pottery Art Exhibition.
2009 - Received Incentive Award at the Kobe Biennale Chinaware Exhibition Competition.
2010 - Became full member of the Japan Kogei Association.
2012 - Exhibited at the Biennale of Contemporary Pottery and Ceramics of Sèvres, held by the National Museum of Ceramic of Sèvres in France.
2014 - Presented Takatori-yaki speakers at the European Triode Festival 2014 in Berlin, Germany.
2015 - Exhibited at the REVELATIONS art event held at the Grand Palais in Paris, France.His “Fragrant Cup” was selected for “The Wonder 500™”, a Cool Japan project for regional revitalization organized by the Ministry of Economy, Trade and Industry (METI)
2016 - His Fragrant Cups were exhibited at the Emperor’s Birthday Celebration Reception at the Consulate General of Japan in San Francisco.
2017 - Invited and exhibited at the 52es Fêtes de la Saint-Martin (Belgium) 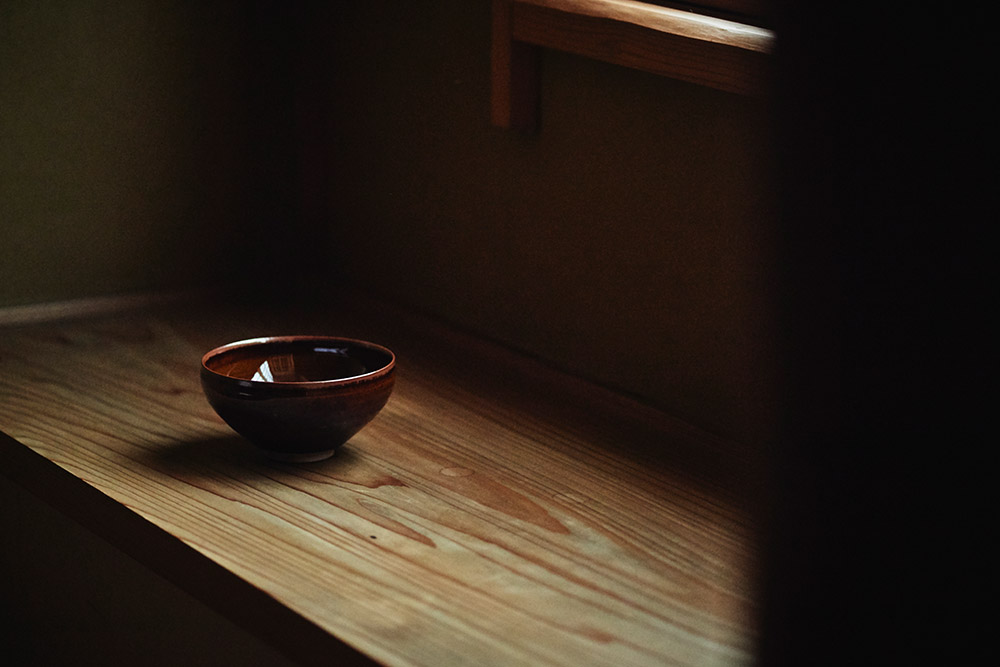 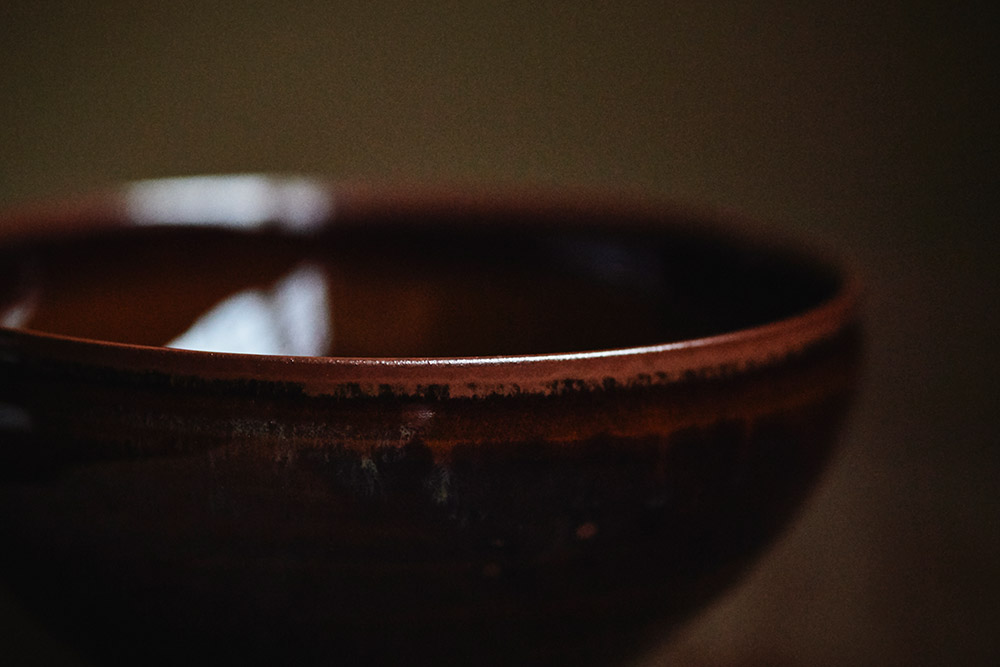 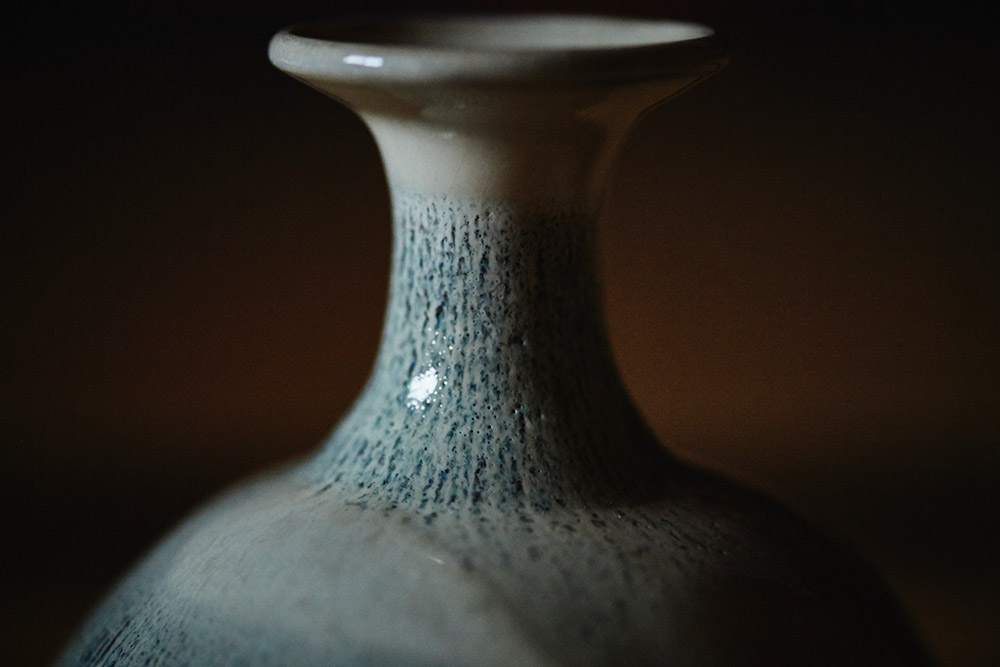 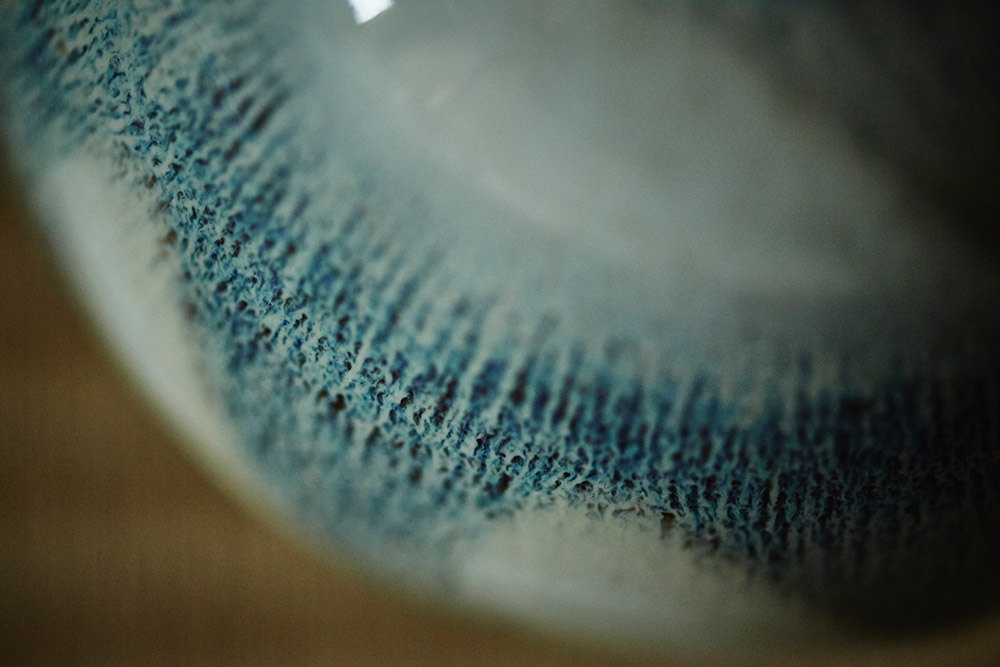 The Takatori Yaki is one of the seven klins created by Enshû KOBORI in 1630. The aesthetics of the Takatori Yaki carries a unique variety of colors in Japanese ceramics: blues, browns, greens; all made from natural elements taken from the Japanese nature. The ceramics themselves possess shapes based on the observation of the nature. The implementation follows a strict code, including the use of wood fire for the baking.

The Takatori Yaki pieces of tea by Hekizan ONIMARU are part of the collections of Zen temples in Japan, among which in the the Ginkaku-Ji (Silver Temple) and Daitoku-ji temples in Kyôto.

The history of the Takatori Yaki started with the building of the TAKUMA kiln (pottery workshop) in the Elman-ji temple which was located at the foot of the Takatori-yama (Fukuoka). This kiln was built under the order of the samurai Nagamasa Kuroda who had just returned to his country after having fought in the Bunroku-Keicho-no-eki war.

From then on, the potteries for tea ceramics started to be manufactured according to the instructions of tea master Enshû KOBORI. And thus was born the Takatori Yaki, that people of this time were going to call the Takatori Enshû. The Takatori Yaki was characterized by thin and elegant ceramics, influenced by master Enshû's own idea of beauty, named kirei-sabi (elegant simplicity). 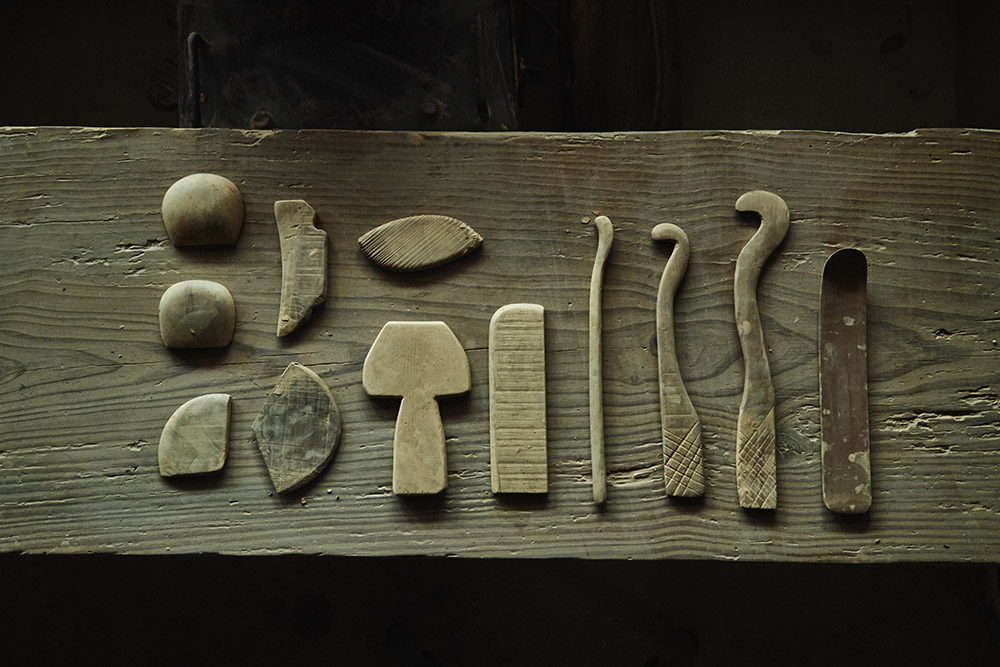 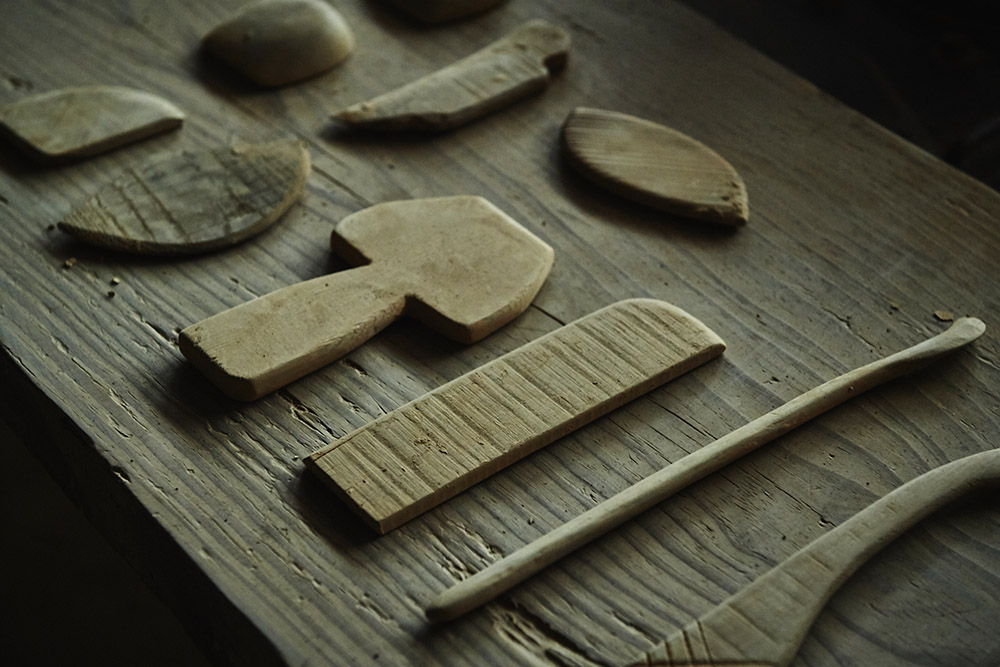 Among other creations of Hekizan Onimaru, we are proud to offer for the first time to green tea lovers all around the world the best cup out there to enjoy all the fragrances of premium green tea. Directly inspired by the shape of wine glasses, this cup, called “Kaoru cup” which can be translated to Aroma cup.

The cup is designed to enhance the aroma and flavor of green tea.The shape and rare clay of the cup concentrates the fragrance of the tea just on your nose and the very thin and skillfully crafted lip will enhance the flow of liquid. Your tea experience will improve in such a way that it would be nearly impossible for you to drink your tea in another cup. This is what we experienced ourselves during our visit at the kiln.

Many Japanese use this cup also for coffee, other hot or cold beverages such as wine or beer. !Each cup is hand-made by the Onimaru Kiln, following the Takatori style tradition, comes with a wood box signed at the kiln. It is a great way to store your cup and protect it. It makes also a great presentation for a gift and is the insurance you are buying a carefully handcrafted Japanese product.

This cup has been selected as a “The Wonder 500™”,  by the Ministry of Economy, Trade and Industry (METI) and in 2016, they were exhibited at the Emperor’s Birthday Celebration Reception at the Consulate General of Japan in San Francisco.
handmade tea cup
"kaoru" Brown 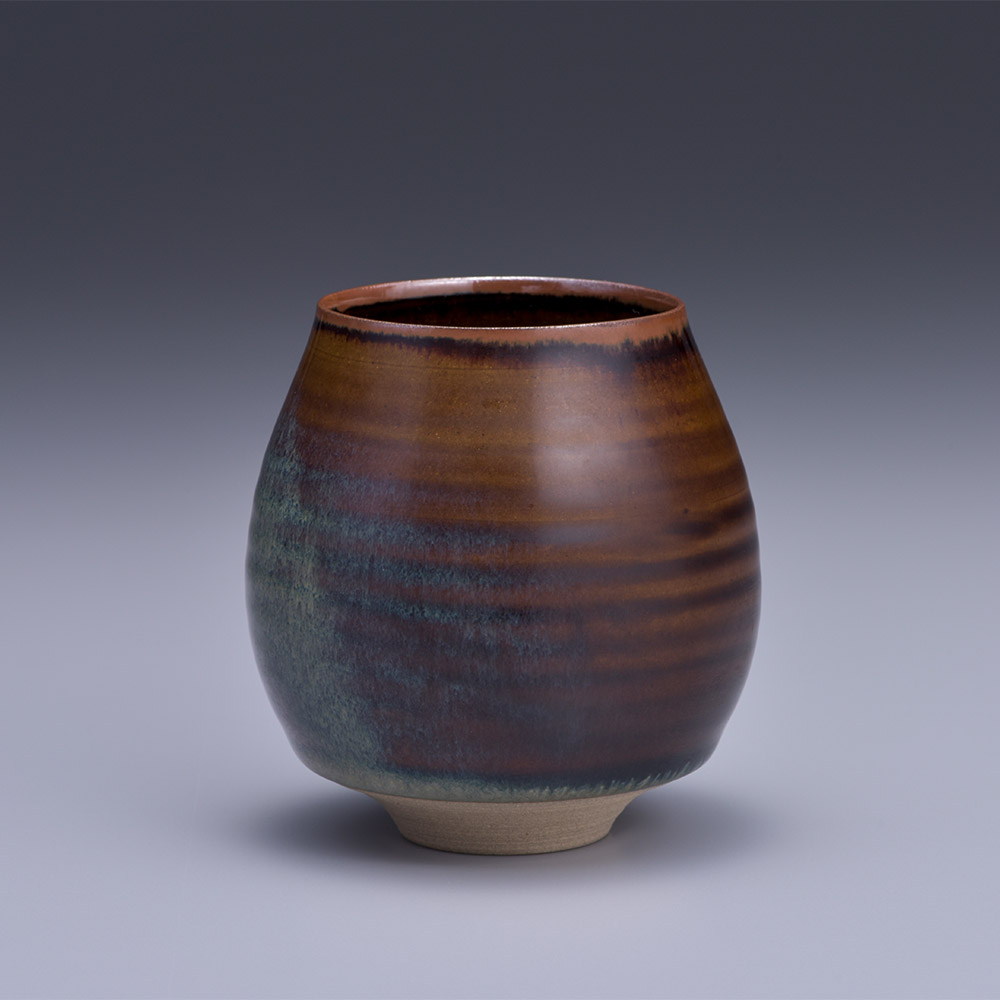 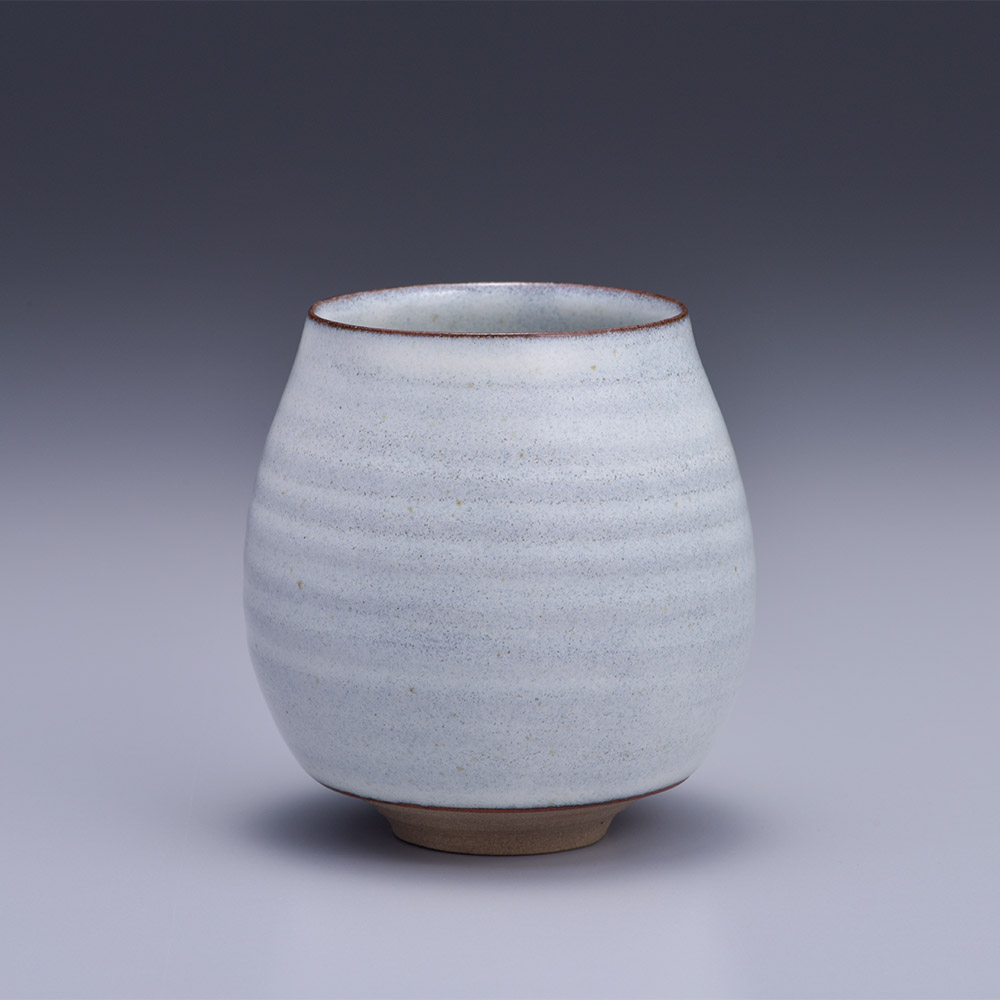 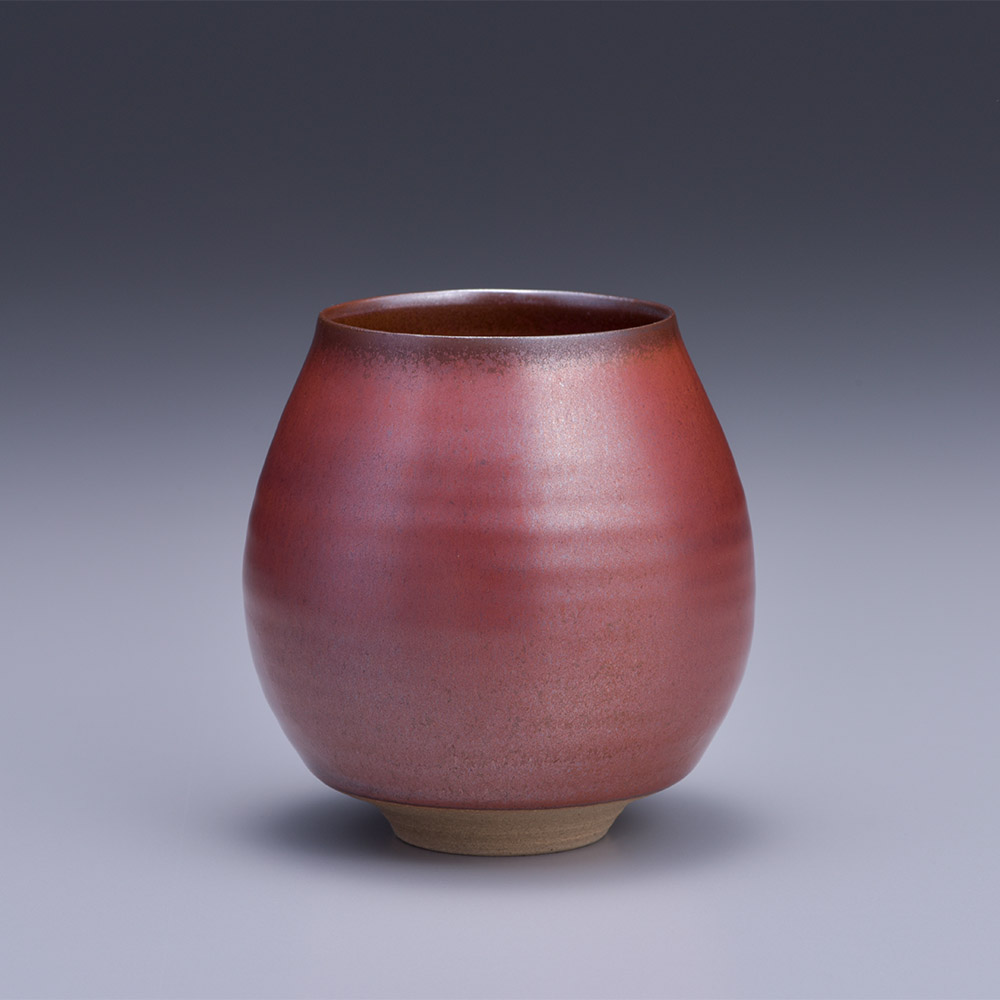 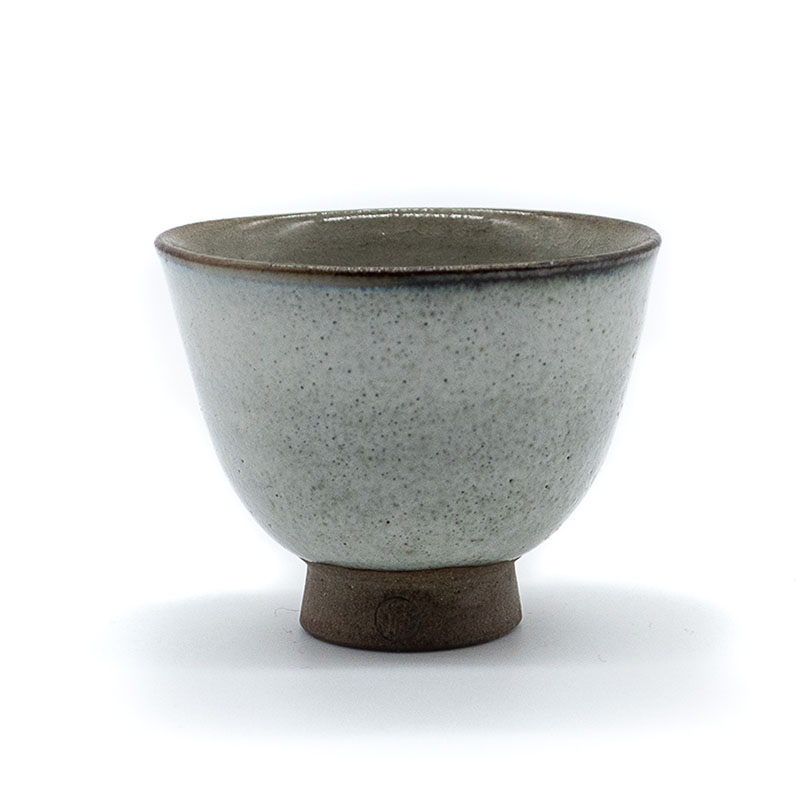 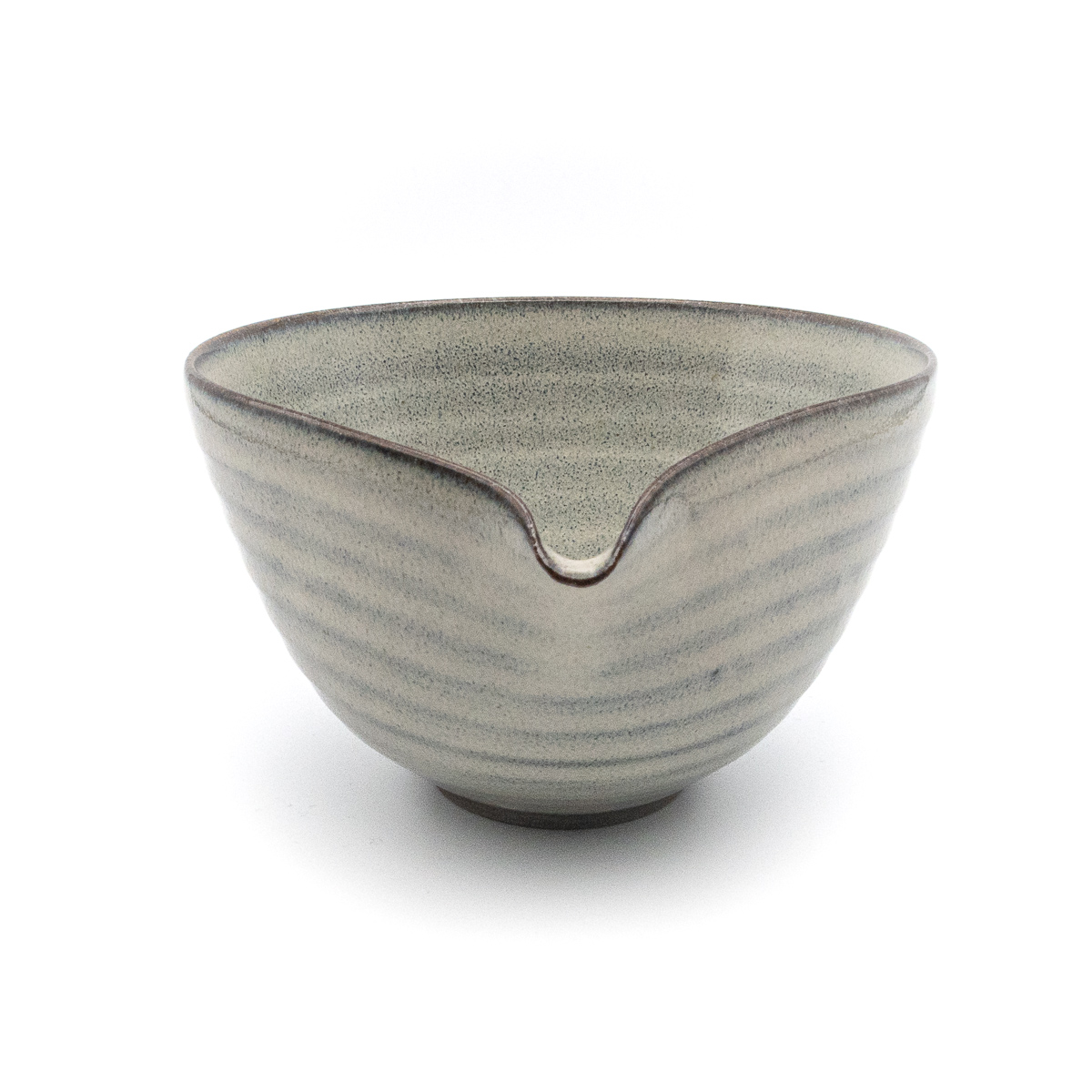