
YOUR BEST CHOICE FOR JAPANESE GREEN TEA

BACK
TO TOP 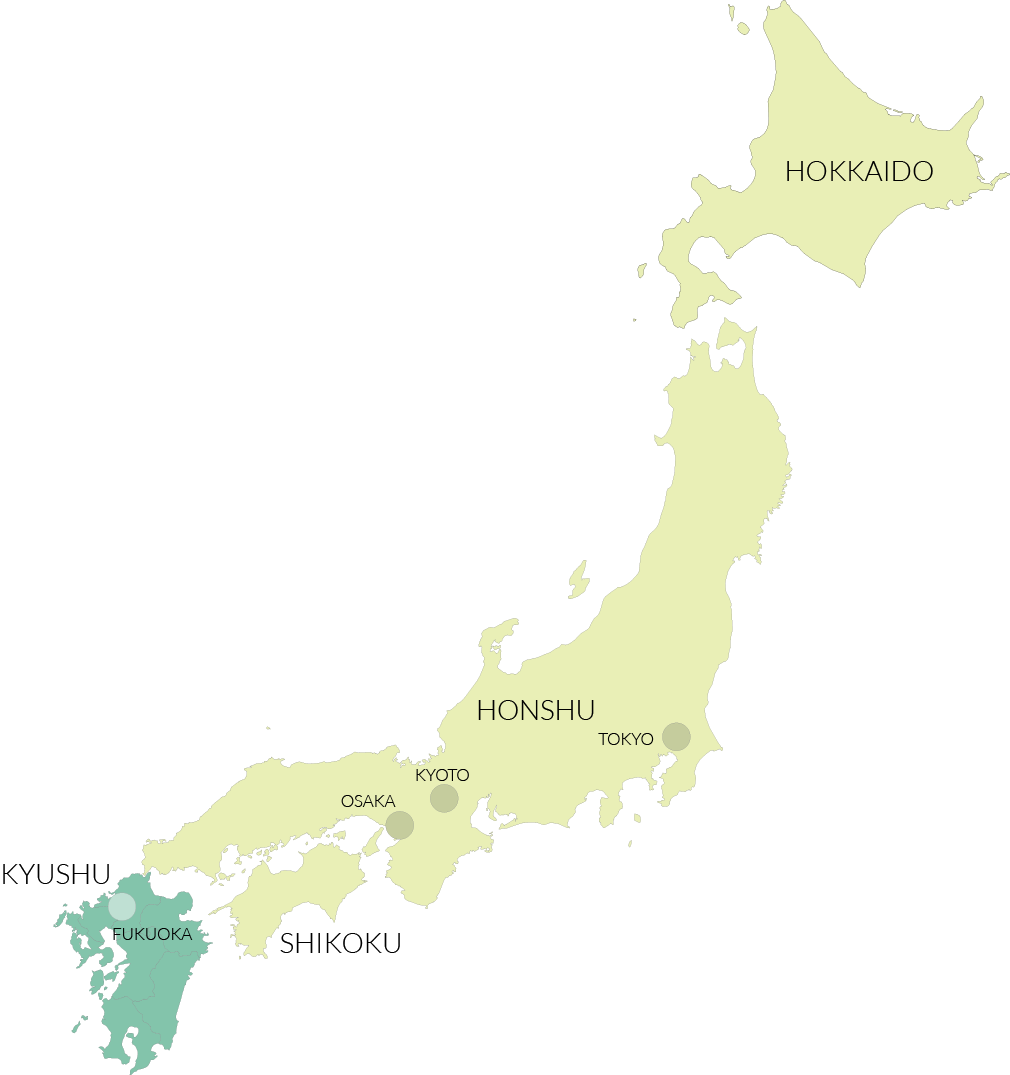 Land of Green, land of fire

Kyushu (九州, Kyūshū, literally "nine provinces") is located on the southwest end of the Japanese archipelago, Kyushu consists of the mainland and a chain of small, sub-tropical islands. It is made up of seven prefectures: Fukuoka, Saga, Nagasaki, Oita, Kumamoto, Miyazaki and Kagoshima. Blessed with rich nature resources and a warm climate, Kyushu is Japan's third largest island. Gigantic caldera volcanoes line up one after another, and appropriately Kyushu is called "Land of Fire."

The southwestern island of Kyushu is the birthplace and beating heart of high grade Japanese green tea. In 1191, Eisai, a Buddhist priest, brought back with him tea seeds from China and planted them in the Sefuri mountains (today in Saga prefecture). This marked the beginning of the Japanese tea culture.

Today, Kyushu is known in Japan for producing high grade teas in all of its prefectures, from Fukuoka in the north to Kagoshima in the south. Its warm climate makes it possible to create Gyokuro, Kamairicha and other unique teas as some tea cultivars can only be grown in Kyushu.

Today, Kyushu represents about 36% of the total tea production area of Japan, with Kagoshima at the top (19%). In terms of production volume, Kagoshima has now taken over Shizuoka prefecture. Land and soil in each area influence the tea’s flavour. Production techniques and cultivars are also decisive factors at the origin of the wide variety of flavours and fragrances of Japanese tea. 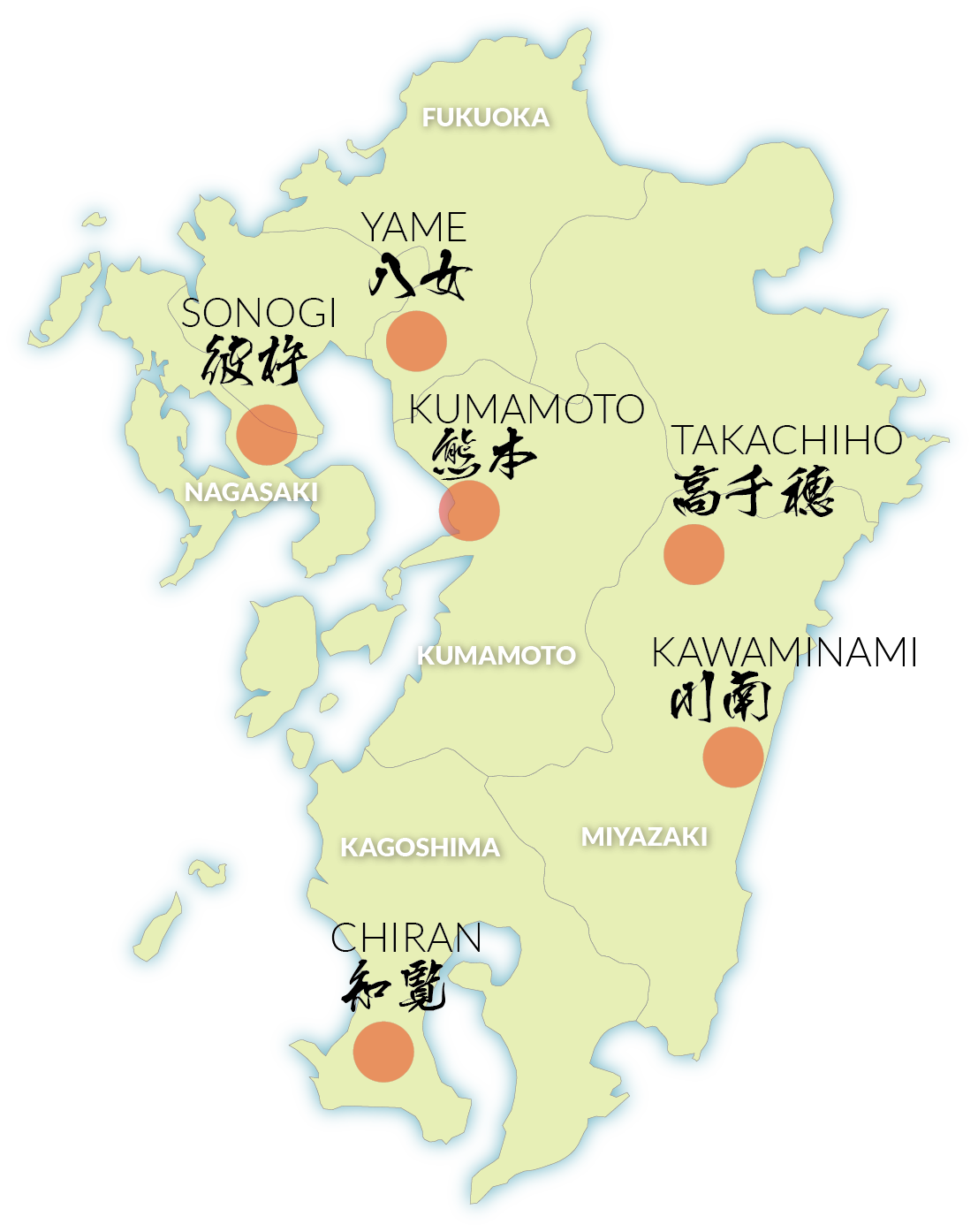 This area is located in the Northern Kyushu. The most renowned plantations in Fukuoka prefecture are located in Yame area.

The tea plantations are located in the basins of the Yabe and Hoshino Rivers.

Both Yame sencha and gyokuro are known for their rich flavor with little bitterness or astringency.

Thanks to its southern location, this area enjoys the earliest first tea picking of the country, with delicious "Shincha" (new tea) available already from March. Thanks to its more clement weather and the proximity of several active volcanoes, the tea grown in this area has a distinctive quality that is celebrated all throughout Japan. Several cultivars that are very sensitive to cold can be grown successfully only in that area. In a general way Chiran Teas tend to be more sweet compared to other regions.

Starting from 2017, "Chiran"  will become the official name of the green tea produced in the entire region of Minami-Kyushu.

North-Eastern Kyushu. The tea production area of Higashi sonogi is in Nagasaki prefecture, and is located in the mountains overlooking the Omura bay.

Higashi sonogi is home to a very special and fine sencha that is not found elsewhere in Japan, called Tama-ryokucha ("coiled tea"), also commonly known as guricha ("curly tea").

The leaves are rolled into "comma" shapes (instead of being kneaded into "needle" shapes, like for sencha). The tea is golden yellow and can be reinfused, with a slightly different taste.

This tea is milder and less astringent than traditional sencha, and because of this, it has met a lot of success in Mediterranean countries, in particular Morocco.

South-Eastern Kyushu. Facing the Pacific Ocean, Miyazaki prefecture is known of its beautiful pristine beaches and its verdant and luscious mountains. It enjoys a mild climate.

While it is not well known outside Japan for its tea, Miyazaki is actually the fourth tea-producing region of Japan. This area produces very high quality tea. I

t is notably home to the exceptional and rare kama-iri-cha, made using a very special production technique (pan fry).

This technique is almost lost as only few producers still have the expertise required to produce this tea.

Kumamoto is situated in the center of Kyushu at the western end of Japan. Mt. Aso-san, one of the largest volcano caldera in the world stands in the east and the Chikuhi Mountains lie to the north.

Shira-kawa River, the Kuma-gawa River, and other rivers flow from the mountains to the western part of the lower current area, forming the Kumamoto Plain and Yashiro Plain giving pure water not only to the tea growers but also for other prefectures.

The climate is moderate to mild but ther region has a very high rainfall, especially in summer. Kumamoto city has been severely hit bit by a series of major earthquakes in 2016 damaging their most famous landmark the castle of Kumamoto.